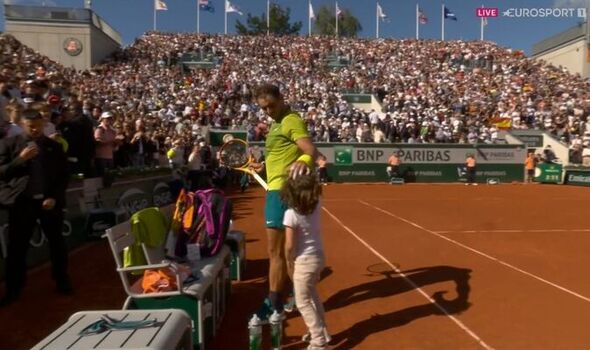 Rafael Nadal was left stunned by a young supporter running onto the court to meet him after his third-round win at the French Open. Nadal had seen off Botic van de Zandschulp in straight sets before the youngster evaded security and ran right up to the Spaniard, who seemed surprised before ruffling the hair of his new No 1 fan.

Nadal had few problems disposing of his Dutch opponent, winning 6-3 6-2 6-4. It sets up a last 16 match with Canadian player Felix Auger-Aliassime, who himself has impressed so far at Roland Garros.

But it was once the players had shaken hands and retired to the side of the court that Nadal got something he wasn’t expecting. As he got back to his seat the boy appeared from out of nowhere, and it wasn’t clear if he asked the iconic player for anything in particular.

Regardless, he did get a pat on the head and a ruffle for his troubles, and there was no great urgency from officials to act. After a several seconds, one security member did amble over, smiling, and start to take the fan back to his seat.

The incident brought a smile to the face of Eurosport pundit Tim Henman, who laughed as he described what happened to viewers: “I think Rafa was probably a bit surprised it’s not what you’re expecting,” said the former British No 1.

“The security guard is thinking ‘I haven’t done my job’. I think the little kid was probably asking for a racquet or a souvenir, like a wristband or something. But yeah, it’s not necessarily what you expect to see at one of the show courts at a Grand Slam.”

For the latest news and breaking news visit:https://www.express.co.uk/sport/football