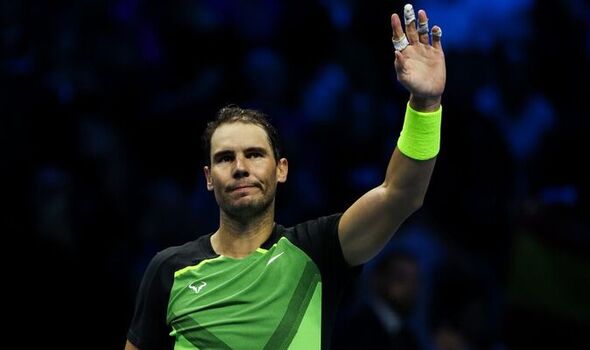 Rafael Nadal’s coach has addressed concerns over the Spaniard’s future in tennis following his disappointing end to 2022. The world No 2 played just two tournaments after the US Open and won only one of four matches but Carlos Moya has reminded fans that the 36-year-old was winning Grand Slams a matter of months ago as he backed his charge to return to his best level with the Australian Open less than two months away.

Nadal’s 2022 season came to an end on Thursday as he ended his four-match losing streak by defeating Casper Ruud 7-5 7-5 in the group stage of the ATP Finals, though he had already been eliminated from contending for a semi-final spot while the Norwegian had already won the group. It was his first match win in more than two months after injuries derailed the second half of his season and raised question marks about his future.

The 36-year-old tore his abdomen at Wimbledon and has since revealed that he tore the muscle for a second time ahead of the US Open, explaining his lengthy absence from competition after crashing out in the fourth round of the final Major of the year. His comeback has so far been unsuccessful as he lost in the first round of the Paris Masters before going 1-2 in the group stage at the ATP Finals, but his coach is not concerned.

Moya explained that the conditions were part of the reason Nadal had failed to record multiple match wins since returning to action in Paris-Bercy as he reminded fans that he won two Grand Slam titles this year to set a new men’s singles record. “I think the conditions are not the best for him,” the retired pro-turned-coach told Spanish media after Nadal’s final match of the season.

“Nor the lack of matches that on another surface may make up for him in his first matches and he is gaining confidence a bit.” The 1998 French Open champion also explained that the ATP Finals had been a tough tournament in the early stages of his comeback, with Nadal facing the top eight players of the season straight off the bat.

He explained: “Besides, here if you’re not very confident, the first day you get a top eight. It’s not easy, but worrying, no. It is the last tournament of the year.” And Moya disputed the idea that there were any issues with Nadal’s level as he confessed it was normal for players to suffer lower periods during the year.

“Not long ago he was winning Grand Slams, so I don’t understand that it’s a level problem,” he said. “But that during a year you go through better moments than others and now he has had to go through a moment, perhaps the least good of the year.”

And he thought Nadal would benefit from ending the year with a victory to snap his losing streak, as he looked ahead to the off-season. Moya added: “It is clear that it is better to arrive at the season having won the last game. But let’s see, there is more than a month and a half left before Australia and obviously it is better to finish like this than not having lost all the games.”