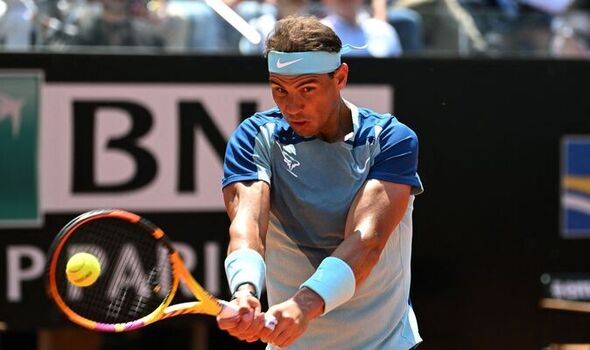 Rafael Nadal is through to the third-round in Rome after beating John Isner 6-3 6-1 in 76 minutes. The world No 4 suffered defeat to Carlos Alcaraz in Madrid last week but managed to bounce back with a win, meaning he has still never lost back-to-back matches on the clay during his career in an incredible record.

Nadal came into Rome off the back of a three-set defeat to Carlos Alcaraz in Madrid last week. The Spaniard is playing just the second tournament of his injury comeback, and had never lost back-to-back matches on clay in his career.

The first set was neck-and-neck until 3-3, when Isner set up two break point chances but blew them with errors as the 10-time champion managed to hold on for 4-3. After failing to capitalise on his chance to take the lead over Nadal, the world No 27 then lost his own serve to give the Spaniard the chance to serve for the set.

Nadal closed out a 6-3 set and carried his momentum into the second set, immediately breaking the Isner serve in the first game. The American halted the third seed’s run of games after five in a row as he held to get himself on the board in the second set at 1-2.

JUST IN: Raducanu ‘needs someone to hold her hand’ after calling herself loner

But the former world No 8 was unable to keep fending Nadal off, as he was broken for a second time in the set to trail 1-4 with the ‘King of Clay’ now a double-break up. And the 10-time champion continued his run of games as he broke Isner in the final game to take the match 6-3 6-1 in just an hour and 16 minutes.

It means Nadal has still never lost two successive clay matches in his long career. The world No 4 now advances to the third-round, where he faces Denis Shapovalov.

The pair faced off in a thrilling encounter at the same stage of the tournament last year, with Nadal saving two match points to come though 3-6 6-4 7-6 (3), eventually winning his 10th title in Rome. The world No 16 has caused controversy so far this week in Rome, after he told the crowd to “shut the f*** up” and received code violations in his opening match against Lorenzo Sonego.

Nadal leads their head-to-head 4-1 but barely survived in a five-set triller at this year’s Australian Open, coming through a lapse in the third and fourth sets to oust Shapovalov 6-3 6-4 3-6 4-6 6-3 in the quarter-finals before going on to win a record 21st Grand Slam title at the tournament.