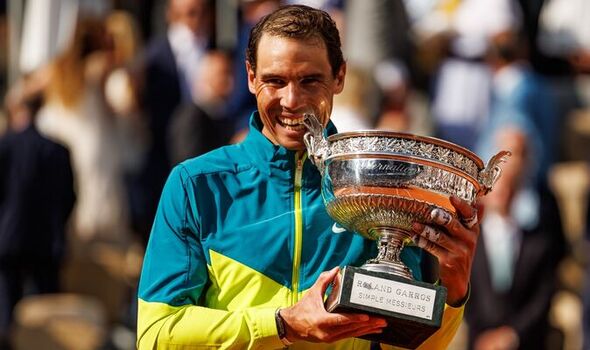 Rafael Nadal has revealed he could hardly walk after his second round win at the French Open and his medical team blocked the nerve in his foot to stop the pain. “I could practically not walk,” Nadal said. “I was lucky.”

The Spanish superstar suffers from a chronic foot injury which flared up again at the Rome Masters last month. But the 36-year-old was still able to beat four players in the top 10 – including new world No 6 Casper Ruud in the final – to claim his 14th French Open title.

Nadal is now halfway to a calendar Grand Slam after winning the Australian Open and French Open in the same year for the first time. In the post-match presentation, he swatted away rumours of his impending retirement by saying: “I don’t know what is going on in the future. I will keep fighting to keep going.”

But moments later on France 2, the Spaniard gave an insight into the off-court struggles as he claimed his 22nd Grand Slam title. Nadal brought his doctor Dr. Angel Ruiz Cotorro with him to Paris to help treatment.

And the 36-year-old said: “The public have helped me during the fortnight. For me it was practically impossible to think I could win this trophy again.

“Without suffering, you don’t win the most important tournaments in the world. Every day is very difficult. The problem with the foot is very difficult. My doctor here has worked very hard. I would like to thank all the medical staff here and back in Mallorca.

“The most difficult moment was after the second match against (Corentin) Moutet. I got back to the hotel and I could practically not walk. I was lucky.

“The doctors blocked the nerve so I could not feel the pain. We have found a solution.

“We did everything we could to continue. I am very happy here. I love playing tennis. It has been difficult with Covid. It is a fantastic feeling.”