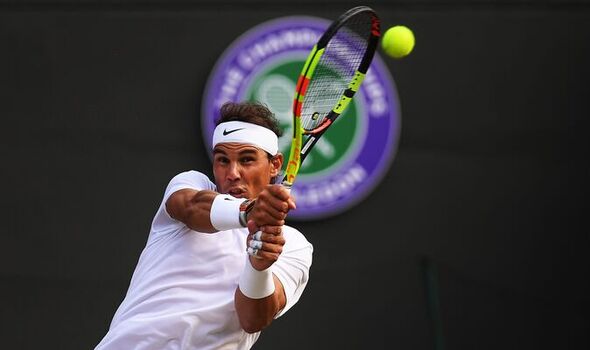 Rafael Nadal has refused to disclose the ATP Player Council’s decision on any sanctions for Wimbledon after the tournament banned Russian and Belarusian players. It comes after Nadal and Roger Federer were told to “come clean” over their role in the ATP’s plans to penalise Wimbledon as the men’s tour holds meetings in Rome.

Nadal is one of the players on the 10-man ATP Player Council, who have been holding meetings in Rome and Madrid to determine the sanctions on Wimbledon and the Lawn Tennis Association for banning Russian and Belarusian players from this year’s Grand Slam and the grass-court warm-up tournaments. A decision could be announced as early as Wednesday with a vote potentially taking place in today’s meeting in Rome.

The men’s tour looks set to strip all ranking points from Wimbledon, turning it into a glorified exhibition, but the two-time former champion in SW19 refused to disclose the council’s decision on Wednesday. “I don’t have a clear opinion on the matter and I don’t want to declare anything,” he said after his win over John Isner at the Italian Open.

“We have to stay in touch with Wimbledon and protect all ATP and WTA players and play for the benefit of all players.” His comments come after Chris Bryant MP, the chair of the All-Party Parliamentary Group on Russia, told The Telegraph that both Nadal and Federer needed to “come clean” over their involvement in the sanctions on Wimbledon as Player Council members.

“Do they want Vladimir Putin to fail or don’t they care?” he added. The least the ATP will do is freeze the rankings and points of Russian and Belarusian players unable to compete in Wimbledon, so they do not suffer a drop-off as a result of the ban. But the 21-time Major champion did not want to talk about the decision while competing in Rome, with Wimbledon almost two months away.

However, Nadal did admit that the council’s final verdict wouldn’t make everyone happy as he added: “I am in Rome, Wimbledon is several weeks away. We work to defend all the players. Nothing will benefit everyone and nothing is perfect, not everyone will like the final decision.”

Some have pointed out that stripping all points from the tournament would affect those who were able to compete, with a points freeze the better option to protect Russian and Belarusian players without hindering the others. With Nadal noting the council wanted to “defend all players”, it could indicate a freeze to ensure others weren’t left without points for competing at The Championships.

The ATP has also been hoping to make a decision in tandem with the WTA but the women’s tour is yet to confirm whether they are also looking to remove all ranking points from Wimbledon. It could leave the tournament in a unique position that would see the men’s singles and doubles players unable to earn points while the women would still be able to build on their ranking.