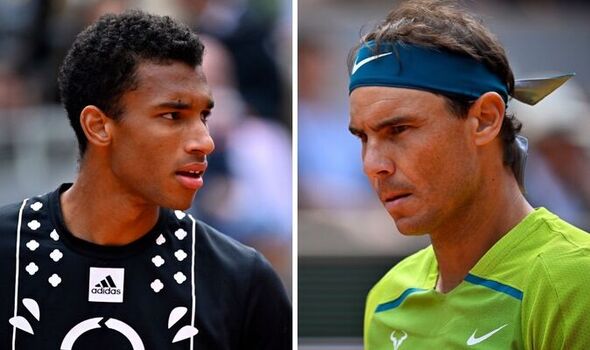 Felix Auger-Aliassime has cast doubt over Rafael Nadal’s ability to win the French Open title this week. The 21-year-old pushed the 13-time champion to a rare five-setter in Paris before narrowly suffering defeat but told his conqueror that it would be “difficult” for him to win three more matches after their marathon battle.

Nadal avoided an early exit from his most successful tournament as he overcame his ex-coach and uncle Toni’s new protege Auger-Aliassime in four hours and 21 minutes to progress to the quarter-final, where he will next face long-time rival Novak Djokovic. But the Canadian has cast doubt over the 13-time champion’s ability to win a 14th French Open crown this week.

While the ninth seed wanted to see the Spaniard do well, he didn’t know whether he’d be able to come through a quarter-final with Djokovic, a semi-final against either Carlos Alcaraz or Alexander Zverev, and then a final match to lift the trophy. “I wish Rafa the very best, I admire him greatly in everything that he’s done. He’s somebody who I really like, and so I wish him the very best for the next match,” the 21-year-old said after their match.

“But then I think that he also knows that it’s going to be difficult. We played for a long time and it’s still the quarter-finals and afterwards there’s still two more matches to win to win the tournament.” The world No 5 came into the tournament underprepared after a six-week layoff for a rib injury he picked up in Indian Wells.

He returned at the Madrid Masters where he lost to Carlos Alcaraz before crashing out in the third round of the Italian Open when his chronic foot injury flared up. Nadal has since admitted that as recently as two-and-a-half weeks ago, he did not know whether he’d be able to compete at this year’s French Open.

While Auger-Aliassime knew it would be a tough task for the 21-time Grand Slam champion to get through the last three rounds, he admitted that was something the likes of Nadal and Djokovic did best. “Rafa is coming here to win the tournament,” he claimed.

“So as I said, I really wish him the very best, but it will be a monumental effort for him, I think, to win. But as he and Novak have always done, they will give it their all right through to the end and it will be a great battle.” The world No 9 also admitted that a few lapses of concentration cost him against the ‘King of Clay’ in Nadal’s 3-6 6-3 6-3 3-6 6-3 victory.

“[It takes] a lot of effort, a lot of concentration,” he said of facing the Spaniard at the French Open. “At one point even though he raised the level of his game, there were a few dips, physically, mentally, and I kind of lost the order of the game. I lost my intentions at one point. But despite everything, I managed to come back when necessary, to serve well again. At the end of the day, I showed some positive things, and I managed to last the whole run and it’s positive for what comes next.”