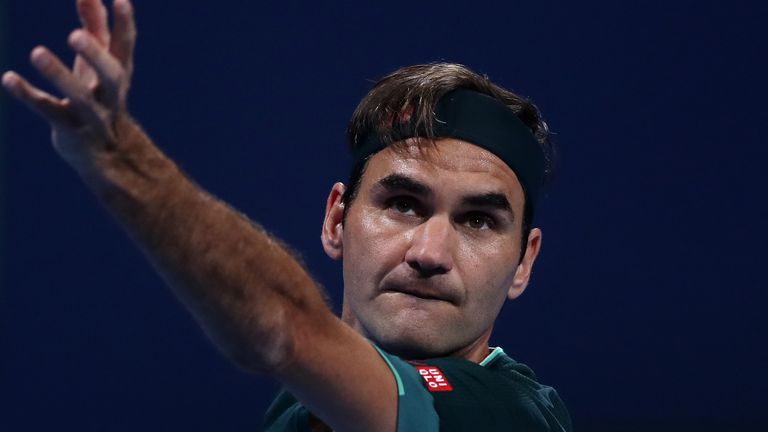 Roger Federer edged out Dan Evans in a thrilling second-round encounter at the Qatar ExxonMobil Open in his first competitive match since January 2020.

Having split the first two sets of an entertaining encounter, Federer fashioned the first match point at 5-4 in the deciding set on the Evans serve but the Brit managed to dig deep to hold on with a classy serve-and-volley approach that was reminiscent of the Swiss great.

Trying to close out your first set in 13 months… Are you nervous, Roger?

A strong service hold from Federer forced Evans, who won his first ATP Tour title in Melbourne earlier this year, to hold onto his serve to save the match for a second time but the 30-year-old from Birmingham was unable to repeat the trick, as Federer fashioned two more match points.

And in his first match in 14 months and following two knee operations, a trademark one-handed backhand down the line sealed a dramatic three-set win for the evergreen Federer, who will be 40 in August.

Last practice before ✈️
Feeling 💪🏼 and ready to go! pic.twitter.com/kkvQTFvWE4

“It feels good to be back, I am happy to be standing here regardless of whether I won or lost but obviously winning feels better,” said Federer, a three-time champion in Doha.

“It was a good match and Dan played a good match, he has been a wonderful training partner with me over the last two weeks – we have played more than 20 sets so it went on and on and it was great fun.

“I was more focused on being tired that winning the point so I felt if I was going to go out I am going to go out swinging but I am incredibly happy I played a really good match, served really well and nice to finish with a backhand down the line on a match point.

“It’s been a long and tough road, but I have enjoyed it, it has been a huge challenge at my age but I have a wonderful team around me that have supported me throughout and it was worth it.” Following defeat to Novak Djokovic in Melbourne 14 months ago, not many thought it would be until March 2021 for the Swiss great to be back on the court, but lockdown gave him the chance to have something that does not come around too often in the world of tennis….rest following two surgeries on his knee.

At 39, Federer probably needs it more than most as he looks to add to his tally of 20 Grand Slam titles, but his comments earlier this week about being 100 per cent ready for Wimbledon suggest the biggest prizes in the game are still the target.

However, it should be said that while he has played down retirement talk, there was a hint of uncertainty in his recent press conference ahead of this week’s return to the court – suggesting the time to seriously consider the end of his illustrious career might not be too far away.

“Retirement was never really on the cards. I think it’s more of a conversation if the knee keeps bothering me for months and months – then let’s look at it. This is not the time to think about that, let’s say in the fall of this year.

“I just feel like the story is not over. It’s not like there’s one particular reason that I wanted to keep playing tennis other than I enjoyed playing tennis, I enjoy being on the road.

“I’m still a work in progress, but probably one of the other reasons for coming back is I want to get that high again of playing against the biggest players and in the biggest tournaments and hopefully winning them again. Hopefully I can play in front of crowds again.”

For the first time the end might be in sight for arguably the game’s greatest player, the man who has set the benchmark for those now closing in on his records and in some cases overtaking him.

While he has been recuperating, Rafael Nadal has drawn level with him on 20 Grand Slam titles, Djokovic closed to within two of the pair after winning the Australian Open and the Serb has now broken Federer’s record for weeks as world no 1.

The knee will remain a concern but a good week’s work in Doha, where he has won the title in 2005, 2006 and 2011 will stand him in good stead for the next few weeks and he has got off to the perfect start.

‘When I’m ready to play, I’ll play’: Kyrgios’ next move a mystery he’s yet to solve