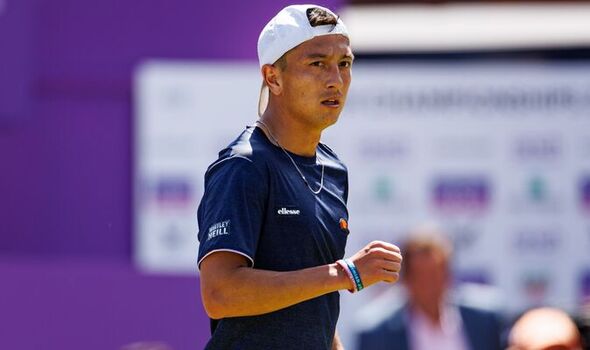 Ryan Peniston pulled off a stunning upset in his ATP Tour debut at the Queen’s Club as he downed top seed Casper Ruud 7-6(4) 7-6(2). The Brit needed two hours and 10 minutes to send the world No 5 packing, with Ruud playing fresh off reaching his first Grand Slam final at the French Open. Peniston was announced as one of the wildcards for Wimbledon while on court.

Peniston was making his main draw debut against the toughest opponent possible – top seed Ruud. The Norwegian was fresh off the back of his first Grand Slam final at the French Open and reached a career-high ranking of world No 5 on Monday but it was the underdog who got off to a better start, creating three break point chances in the opening game.

The top seed was able to save all three, and was forced to fend off three more throughout the opening set. It was the 26-year-old’s turn to face pressure on his serve as he saved a set point in a lengthy game to hold for 6-6 and force a tiebreak.

And it was the home favourite who recovered from an early mini-break to win two points in a row on the Ruud serve en route to closing out a 7-6(4) first set. The 23-year-old received treatment from the physio at the conclusion of the set for what appeared to be an issue with his left leg or hip.

JUST IN: Serena Williams set to team up Venus’ coach in Wimbledon comeback

The world No 5 appeared to improve in the second set and was able to break the Peniston serve for the first time, winning four points in a row to take a 4-3 advantage. But the Brit fought to immediately break back for 4-4 and held to love to put himself within a game of the match.

He went 0-30 up with Ruud serving at 4-5 and appeared to earn three match points when one of the Norwegian’s shots was called long but it was overruled and Peniston was unsuccessful in his challenge as the top seed held for 5-5. It was then Peniston’s turn to hold from 0-30 down before the second set also went to a tiebreak.

This time it was the 26-year-old who took an early mini-break advantage and he was the dominant player in the breaker, quickly taking a 5-1 lead. With two points on his serve at 5-2, the Brit closed out the biggest victory of his career 7-6(4) 7-6(2) much to the delight of the home crowd, sending the French Open finalist packing.

Peniston’s impressive performance comes as his Wimbledon debut has been confirmed, following an announcement from the tournament that he was awarded one of the main draw wildcards.

The world No 180 will next face either Francisco Cerundolo or Pedro Martinez at Queen’s.

Australian Open could be pushed back by TWO weeks

Tennis stars to receive perks for getting Covid-19 vaccine