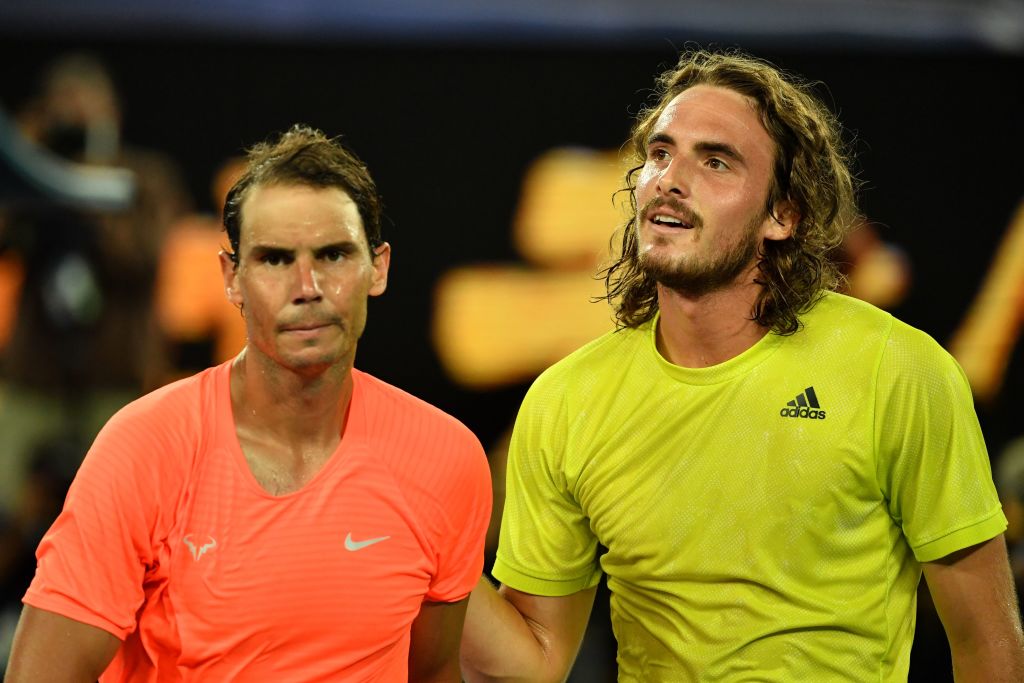 Rafael Nadal admitted he was ‘sad’ to have suffered defeat to Stefanos Tsitsipas in the quarter-finals of the Australian Open, having blown a two-sets lead.

Nadal was clearly frustrated with himself for some big errors in the third-set tiebreak particularly, while he also lamented his misfortune at struggling with a back injury in the buildup to this event.

It was only the second time Nadal, the world No. 2 from Spain, has lost from two sets to love up in a Grand Slam and he couldn’t hide his disappointment at failing to return to the semi-finals at Melbourne Park.

‘Australian Open is one of my favourite events, without a doubt. So I missed an opportunity to be in that semi-finals again. And that’s it.

‘Well done for him. He played better than me probably in important moments. Was an equal match.

‘I tried my best in every single moment. With the right attitude. No complaining at all in no one moment, even in the tougher moments.

‘And that’s it. Just another story in my tennis career. That’s it. No, another match I lost here in Australia with important advantage, and just accept and keep going. That’s the life.’

Nadal was complimentary of Tsitsipas’s performance but lamented some of the mistakes he made in key moments.

‘I am playing against one of the best players of the world, so you always have to expect the best from the opponent, no, and be ready for anything,’ added Nadal.

‘I think he changed a lot the level then. I think in the third he already start to play much better. Then in the fourth and fifth I think he played a very, very high level of tennis.

‘Just well done for him. As I said before, I made a couple of mistakes. Was not enough for me, and I have to go back home and practice to be better. That’s it, no?

‘I think I was in great condition before here. Then have been with bit unfortunate for me what happened for 20 days, and then I fight back to play I think a decent tennis.

‘Today wasn’t enough. Was close. Just that’s tennis. That’s all. That’s the sport. One player wins; the other lose. Today I lost. So the only thing that I can do is try to be better next time, and today congratulate him.’

While he insisted the back isse that caused him problems early in the tournament was not a reason behind his defeat, he did confess that a streak of bad injury luck in Melbourne had been a source of frustration.

‘With the body and these issues, it’s difficult to know exactly why these kind of things happens,’ he said when asked about his injury history at this tournament.

‘The only thing that I can tell you is I always prepared the proper way to be ready for here. You know, always have been a huge goal.

‘I really believe that sometimes, yes, we can find a reason because we were not able to prepare the proper way because I have been injured in December and this stuff, and then you arrive here with very short preparation, this kind of stuff, yes, happen a couple of times.

‘And other times, I mean, I probably have been unlucky, no? 2014, for example, final against Wawrinka, why that happened in the final after a great tournament for me and a great preparation, no? Why?

‘I don’t like to say “unlucky,” but why? I don’t know. We can’t find a reason, no? Or today, this time, why I had for 20 days the back very stiff and I couldn’t practise the proper way. I really don’t know.

‘We can find excuses or reasons or maybe this quarantine that we need to be more time in the room than usual, yes, maybe. But, I mean, I am not the guy that I gonna find excuses on that or gonna complain about what happened, no. Just accept. I never considered myself unlucky person at all. Doesn’t matter the injuries that I had. I think I am very lucky person.

‘The only thing that I can do is just keep going. I put myself in a position even the challenges that I faced that I was in quarter-finals with two sets up, close to be in that semi-finals. So have been a chance lost, yes, but life continues. I hope to keep having chances. Well, I gonna keep fighting for it.’