Australia, chasing an eighth title in the women’s team competition which was previously called the Fed Cup, beat Belgium in their opening tie and their 2-1 win against Belarus on Thursday (Friday AEDT) ensured they will top Group B. 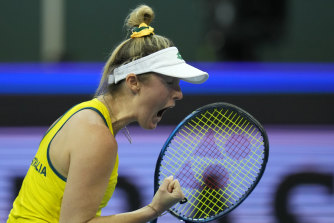 Storm Sanders celebrates after winning a point against Yuliya Hatouka.Credit:AP

Belarus, who have never won a Billie Jean King Cup title, came to Prague without their best two players – world No.2 Aryna Sabalenka and two-time Australian Open champion Victoria Azarenka – and lost both their group ties.

Under the tournament’s new format, 12 teams have been split into four groups of round-robin play, with the group winners progressing to the semi-finals.

The Russian Tennis Federation will face 18-time winners the US in the first semi-final. Australia will take on either hosts Czech Republic or Switzerland.

Sanders, 27, gave Australia an ideal start with a comfortable 6-3, 6-3 win in her first meeting against an error-prone Yuliya Hatouka, ranked 192nd in the world.

“For me to come out and deliver under pressure, it’s a great feeling,” said Sanders, who won her singles rubber but lost the doubles against Belgium on Tuesday. “I played a really solid match. I was a little bit tired from my two matches on Tuesday, but I came out and just fought really hard.”

Aliaksandra Sasnovich jumped to a 4-0 lead in the second singles rubber against Tomljanovic before the 43rd-ranked Australian, who missed the tie against Belgium due to illness, found her footing.

Tomljanovic improved as the match progressed and though she could not save the opening set she did enough to beat the 88th-ranked Sasnovich 4-6, 6-2, 6-3.

“There really is no greater feeling,” Tomljanovic said. “I came here to help the team and I’ve ended up doing that, so that makes me happy.”

Belarus salvaged a point with victory in the doubles. Sasnovich and Lidziya Marozava beat Ellen Perez and Olivia Gadecki 6-4, 6-4.

Meanwhile, unseeded James Duckworth advanced to his first masters quarter-final after beating fellow Australian Alexei Popyrin 7-6 (6), 6-4 in Paris. Duckworth will take on Polish seventh-seed Hubert Hurkacz for a place in the semis.

‘When I’m ready to play, I’ll play’: Kyrgios’ next move a mystery he’s yet to solve