Fifth seed Aryna Sabalenka has vowed to use her newfound zen to beat second-week jitters at the Australian Open after a confident third-round win on Super Saturday, amid a succession of quick, clean victories for top women players.

The two-time US Open semi-finalist, from Belarus, dispatched her former doubles partner Elise Mertens 6-2, 6-3 in an hour and 15 minutes. She will next meet the Swiss 12th seed Belinda Bencic, who advanced to the fourth round of a major for the fourth time with her 6-2, 7-5 win over Italy’s Camila Giorgi on centre court. 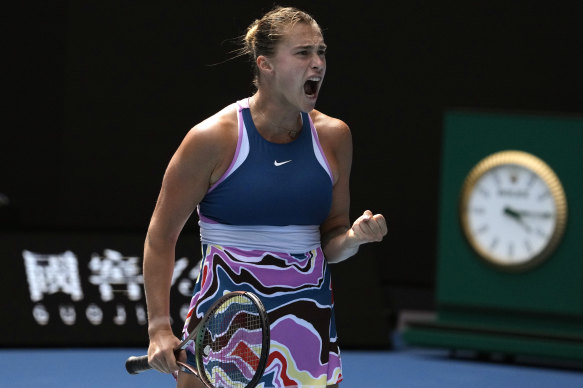 Aryna Sabalenka roared into the second week of the Australian Open for the third straight year with a clean win over former doubles partner Elise Mertens.Credit:AP

Sabalenka, who significantly improved her notoriously patchy serve over the past year, was broken once as Mertens attempted to get herself back in the match early in the second set.

The Belgian 26th seed then battled to hold serve in a 13-minute game to even it out at 2-2, but Sabalenka pounced a few games later with a string of speedy winners to take a match-winning break and then close it out.

Sabalenka and Bencic’s round-of-16 clash will pit the winners of both Adelaide International titles against each other for a place in the quarters.

The Belarusian won last year’s Australian Open women’s doubles with Mertens, their second major as a team, but is yet to make it past the fourth singles round at Melbourne Park. 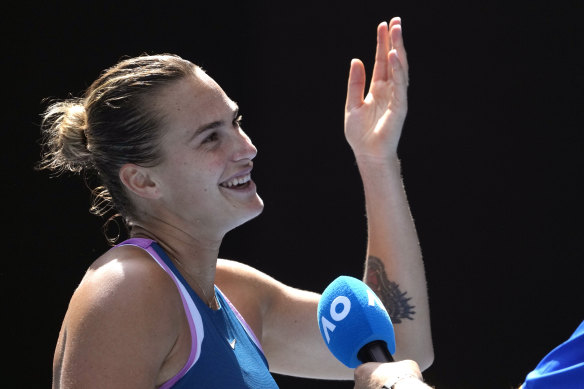 “Finally I understand what everyone was looking for”: Sabalenka says she is determined to stay boring on court.Credit:AP

She was mocked by Australian audiences for her grunting in 2018 during a first-round match against Ash Barty, and has previously been criticised for on-court antics including a paltry post-match handshake and supposedly taunting a ballboy with her water bottle.

Sabalenka said after Saturday’s match that her recent success came from her newfound calmness on the court, and she would bring that with her in the tournament’s second week.

“I wish I would be like that a few years ago. Finally, I understand what everyone was looking for and asking for … I need to be a little bit boring on court,” she said.

“I’m just trying to stay away from negative [emotions] and just fight for every point. There were a few moments when I was about to throw my racquet or scream something.”

Sabalenka conceded she struggled with nerves in the second week of last year’s Australian Open, when she lost in an upset to Estonian Kaia Kenepi in the fourth round. “I remember I was getting nervous, over-thinking, over-dreaming,” she said.

The Belarusian’s first-serve percentage dropped back down to 52 per cent in the second set, but she clipped one at 193 km/h and was the superior returner and ball striker throughout, hitting 32 winners to Mertens’ 12.

Meanwhile, on Saturday, China’s Zhang Shuai ended the surprise run of American qualifier Katie Volynets, who had knocked out ninth seed Veronika Kudermetova in the previous round but was no match for the dominant Zhang.

China’s top-ranked player needed only an hour to get past Volynets 6-3, 6-2 and book a place against big-serving Czech Karolina Pliskova in round four – before heading back out on court for the doubles later on Saturday.