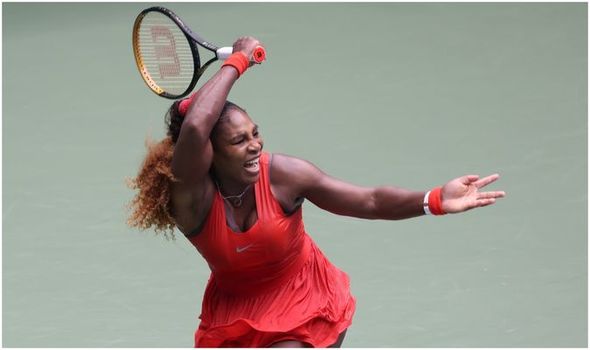 Serena Williams won the mother of all battles at the US Open to push to within two wins of a record-equalling 24th Grand Slam singles title.

The American superstar won her last Grand Slam at the 2017 Australian Open when she was two months pregnant with her daughter Alexis Olympia Jr. And yesterday Williams, who turns 39 later this month, faced Bulgarian mum Tsvetana Pironkova who was playing her first event since Wimbledon 2017 after giving birth to her son Alexander in April 2018.

Unranked Pironkova took the first set and led by a break in the second before Williams quelled her anxiety to battle back to win 4-6 6-3 6-2 to reach her 14th US Open semi-final in her 20th appearance.

Williams is bidding to equal the record of 24 Grand Slam singles titles held by Margaret Court. And become the fourth woman in the Open era to win a major title as a mother after Court, Evonne Goolagong and Kim Clijsters.

She will now face the winner of the second quarter-final between Victoria Azarenka and Elise Mertens.

But Pironkova had looked the most likely winner in the first set as she drove Williams to distraction with her subtle changes of pace and old-school forehand slice. She took her first break with a backhand winner down the line to lead 3-2 and took her third set point with another backhand after 40 minutes.

The Bulgarian then broke in the first game of the second set before the American finally found her range. Williams took her first break point after 50 minutes when a Pironkova forehand found the net to draw level at 1-1. And she broke again to lead 3-5 after a stunning 26-shot rally before closing out the second set with the help of three aces.

The American No.3 seed took her third break point to win the first game of the third set after Pironkova fell to the court in the Arthur Ashe Stadium after failing to put away a volley on game point.

The Bulgarian ended a run of losing four games to hold for 2-1 but was broken again to trail 2-5 after a brilliant Williams backhand winner. And the six-time champion took her first match point with a backhand winner to claim victory in just over two hours.