Home » Tennis » ‘Strong like myself’: Williams set for clash with Sabalenka

Serena Williams and Aryna Sabalenka are set for a fourth-round showdown that will pit two of the tour’s most powerful hitters against each other for the first time. 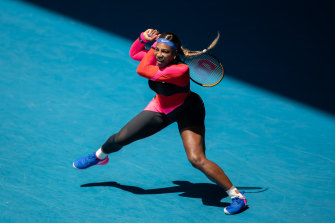 Serena Williams will come up against Aryna Sabalenka in a clash of big hitters.Credit:Getty Images

The wins to Williams and Sabalenka came shortly before No.3 seed and 2019 Australian Open champion Naomi Osaka beat tricky No.27 seed Ons Jabeur 6-3, 6-2.

Williams is showing no signs of the shoulder injury that forced her to withdraw from the WTA lead-up tournament, and if she beats Sabalenka could face Iga Swiatek or Simona Halep in the quarter finals.

But first, on her quest to equal Margaret Court’s grand slam record, she must beat the fast-improving 22-year-old Belarusian who on Friday said she modelled her game on the legendary American.

“It’s a big challenge [playing Williams], but it’s a tough one, but I’m going to do everything I can to prepare myself for that match, like mentally be ready to get this win, actually, because, yeah, she’s huge and she’s a great player, and it’s always I think a big challenge to play against these kind of players,” Sabalenka said. 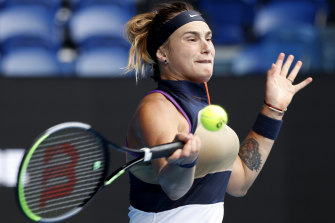 Aryna Sabalenka during her match against Ann Li. Credit:AP

“I was thinking like, wow, she’s really powerful [the first time I watched Williams] play as a teenager]. I want to be like powerful too, and like I want to dominate on the tour the same like she do. And, yeah, there was, I was a kid.

“Yeah, I never played against her and I was trying to don’t look in the draw, but some people tell me that I might play against her and I saw that and I was like, OK I’ll just leave it for now because I need to go through Li first. But I think it’s a big challenge and I really want to, how to say, to thrill myself so, yeah.”

Williams has not won a grand slam since the 2017 Australian Open, where she beat her sister, Venus.

“Well, she [Sabalenka] hits very hard. She has a big, big power game. She’s a big girl. Strong like myself. So I think it will be a really good match – with no crowd,” Williams said.

Osaka’s win means she will face Spanish 14th seed and two-time grand slam winner Garbine Muguruza in the fourth round, after she beat world No. 53 Zarina Diyas on Friday.

Muguruza was impressive in the lead-up WTA tournament, losing in the final to Ashleigh Barty.

Muguruza has averaged a remarkably low seven unforced errors per set so far this Australian Open.

“When you do little unforced errors, either you’re playing well or you’re not taking too much risk,” Muguruza said. “No, I feel like I’m doing the right shots at the right time probably, trying to make my opponent be the one doing the unforced errors. But, yeah, actually I don’t look too much at the statistics. But it’s a great sign that I’m playing inside the court, not outside the court.”