Sue Barker has claimed that the crowd at Wimbledon proved Novak Djokovic wrong after the Serbian was crowned champion at SW19 for the seventh time on Sunday. The 35-year-old defeated Nick Kyrgios 4-6, 6-3, 6-4, 7-6 to seal his 21st Grand Slam, but he has not always felt the love from Wimbledon fans.

Djokovic has previously hit out at fans on Centre Court, and was even jeered during his semi-final win over Brit Cameron Norrie after he blew a kiss to one member of the crowd during his celebrations at reaching the final.

However after Djokovic took the Wimbledon trophy to the balcony, he was greeted with a huge cheer from several hundred fans in a moment that BBC presenter Barker believes may change the Serbian’s perception of the fans.

“Huge cheers for Novak Djokovic from Centre Court which was really good to see,” Barker said. “That will make him feel good, because he often feels that he doesn’t get the love and respect from the crowds but I tell you what, he is going to get it just when he walks out onto this balcony. Already hundreds of people are there and this is such a lovely moment and something that he will really enjoy, look at that, this is going to be a massive roar. 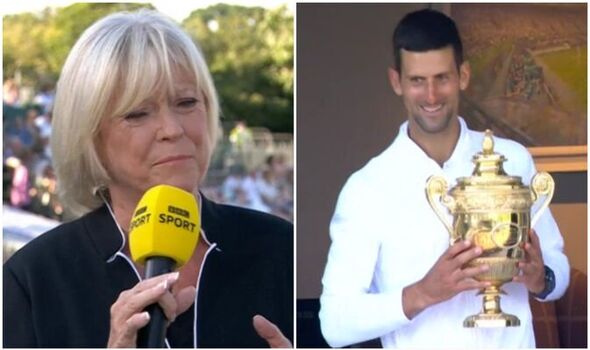 “As far as the eye can see, they have even left your hill Tim [Henman] to go down and cheer this champion and appreciate what they have seen because perhaps so many people thought he wasn’t playing his best this year, and how he was able to lift himself here today and play probably the best tennis he has played all year.”

In the 2018 Wimbledon tournament, Djokovic hit out at fans after he defeated Brit Kyle Edmund in the third round. He claimed that fans were coughing and whistling as he prepared to take his serve, and then goaded them by cupping his ear when he was victorious over the British No 1 at the time. 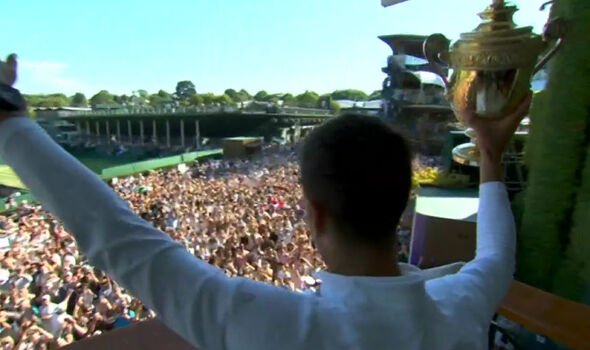 Djokovic had to come from behind to claim his fourth successive Wimbledon crown as Kyrgios won the first set, but the fiery Australian’s controversial side came out, not for the first time in this tournament, as he requested a fan be ejected from the arena and the BBC were forced into apologising several times for his swearing.

Former British No 1 Tim Henman believes that Kyrgios will be disappointed with himself in his first-ever Grand Slam final showing. “Kyrgios has let himself down,” Henman claimed during the BBC’s Wimbledon final coverage. “That dialogue is going to come back and haunt him.

“Surely it is about accepting responsibility. It’s about Kyrgios going out and executing his game plan to the best of his own ability. He’s got in his own way and handed over the initiative to Djokovic.”