Tennis Australia is exploring the prospect of using Adelaide to quarantine a small portion of the 1000-strong international tennis contingent set to arrive in Australia next week for the summer tennis season.

TA has been in discussions with the South Australian government, and staging an exhibition event involving some of the world's leading players in Adelaide, prior to a series of tournaments in Melbourne in early February before the Australian Open, remains on the table. 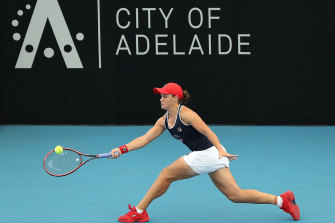 Ashleigh Barty in action at the 2020 Adelaide International. The city may act as a quarantine venue for some players for this year’s Australian Open.Credit:Getty Images

"We’re working with the South Australia government who’ve been magnificent in supporting us," Tiley said.

"We’re hoping that there’s an opportunity to have some professional tennis in their state during the course of this period."

The ongoing threat of border closures between the states continues to impact TA's decision-making.

Five tournaments – two WTA 500 events, two ATP 250 tournaments and the ATP Cup men's teams event – will be held concurrently at Melbourne Park in the week before the Australian Open starts on February 8.

"If there’s a situation where borders are being closed, we would review that situation," Tiley said.

Australia’s world No.1 Ashleigh Barty has confirmed her return to the court will happen in one of the women’s events in Melbourne.

The 2019 French Open champion was set to publicly discuss her plans for the Australian summer at a media event in Brisbane on Friday but that was postponed after the city announced a three-day lockdown starting on Friday night after a confirmed COVID-19 case in the city.

Stefanos Tsitsipas opens up on loneliness and isolation in the bubble