The players are arriving from all over the world to prepare for the Australian Open, a grand slam event that, like everything these days, will be overshadowed by the coronavirus pandemic.

The start of the 115-year-old tennis tournament has already been delayed until February 8 because of quarantine restrictions and many are questioning whether it should be held at all.

Some prominent epidemiologists have warned that bringing 1200 players and their entourages here poses a huge risk at a time when Australia is desperately trying to keep out the mutant strains of SARS-COV-2 that have driven up infection rates overseas. 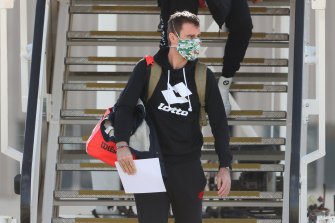 Tennis players and officials arriving in Melbourne on Thursday ahead of the Australian Open.Credit:Getty

One player, Madison Keys, has already pulled out after testing positive for the disease and former world number one and five-time runner up Andy Murray is in serious doubt after his diagnosis. It’s almost certain, given skyrocketing infection rates in countries such as Britain and the US, that others will test positive after they get here.

Of course, Cricket Australia successfully handled a similar challenge quarantining the Indian cricket touring party that came to Australia in November but that was one team from one country. It was also before the new mutant strains emerged. The task of handling the players and public nervousness is an order of magnitude greater for the huge travelling caravan of tennis players. If the virus escapes it could undo all the hard work that seems to have brought the outbreaks that started in NSW last month back under control.

Tennis Australia and the Victorian government have countered by announcing what they say is a watertight system of hotel quarantine. A group of elite players will do their two-week stint in a special facility in Adelaide while the rest will be housed in three Melbourne hotels. They will be supervised by a staff of 1700 and allowed out only for five hours' practice a day at the Melbourne Park courts.

On the face of it, these quarantine arrangements sound effective and the risk should be manageable. The Sydney Cricket Ground test has not produced the feared explosion in cases and provides an encouraging precedent.

Moreover, provided the risks are contained, the tennis should bring major benefits, both economic and social. Finding a way, as difficult as it was, to run all three major football codes, as well as the cricket, produced profound joy for a population that, after 12 months of warnings and intermittent lockdowns, sorely need something to cheer about. In addition, Tennis Australia estimated that last year’s Australian Open added $380 million to Victoria’s economy, created 1700 jobs and reached a television audience of 900 million households daily.

The next few weeks will require careful planning and vigilance. Just as the cricket fans had to accept reduced crowds and masks, Tennis Australia must ensure that spectators and staff – ballboys, umpires and hospitality workers – are COVID-safe.

While The Age supports the tournament going ahead it points to separate questions about the flaws in our government's approach to borders. People are right to point to the inconsistencies in the treatment of tennis stars compared to the tens of thousands of ordinary Australian travellers.

While Rafael Nadal and the like go through the VIP express lane and board specially-organised Tennis Australia charter flights to come here, at the tournament’s considerable expense, over 40,000 Australian citizens overseas are waiting in line to be allowed back in.

Hotel quarantine places have long fallen well short of demand and the queue will only get longer after the decision last week by national cabinet to slash the weekly cap for arrivals in NSW, WA and SA because of the higher risk posed by new virus strains.

This has left many Australians in limbo. For instance, The Age reported last week on the case of Stuart Kemp, 31, and his English wife who had quit jobs, shipped their possessions to Melbourne and booked their flight but had their tickets cancelled after the announcement. He has been told he cannot return until mid-March.

It is hard to avoid the impression that tennis players are coming here at the expense of Australians stranded overseas and exposed to the pandemic. It is also strange that Victoria can find places for the tennis stars while its residents are stranded in NSW and Queensland because of its harsh border closures.

The answer to this injustice is not to cancel the tennis. Rather, national cabinet should find a way to bring stranded Australian home faster – whether by increasing capacity in hotels, opening new facilities or spreading the load more evenly between states and the Commonwealth, which has power over quarantine under the Constitution.

While airlines have plenty of seats, because of the restrictions on arrivals only about 12,000 people have been repatriated since March.

A report in October on hotel quarantine by former health bureaucrat Jane Halton recommended that the federal government establish a national facility for quarantine to be used for emergency situations, emergency evacuations. Victoria should also quickly review its border policy in the light of the low case numbers in NSW.

It will be hard to enjoy the Australian Open unless we know that more is being done to bring Australians home from overseas.

Note from the Editor

The Age’s editor, Gay Alcorn, writes an exclusive newsletter for subscribers on the week’s most important stories and issues. Sign up here to receive it every Friday.