World No.1 Novak Djokovic says the ruling sentiment among tennis players is that the season should be called off if it cannot proceed without quarantine.

Djokovic said the Australian Open experience had proved gruelling for everyone and led to a rash of injuries to major players. “Talking to a lot of players, a majority of the players just don’t want to go ahead with the season if we are going to have to quarantine most of the tournaments,” Djokovic said. 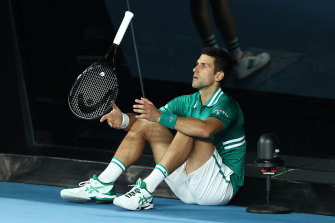 Novak Djokovic, one of several players struggling with injury, sits down on the court during his match against Alexander Zverev.Credit:Getty Images

“So this is something that should be discussed, like as of now.

“I’m waiting for some answers. I want to understand how our continuation of the season post-Australia is going to look like, because this definitely is not good for players in terms of their well-being.”

Djokovic said players had resigned themselves to lockdown stringencies at the Australian Open because it was a grand slam, with near-normal prize money.

Djokovic suggested as an alternative to the regular tour a hub somewhere. “Maybe it’s something like an NBA bubble, because I heard some players talk about that, and I don’t mind to discuss about that kind of idea,” he said.

“Select one place and we play all the tournaments on that surface and that place. You know, three, four weeks in – three, four, two, three weeks’ rest – then back again. Something like that.

“But we just have to discuss options, because I don’t know honestly if this is going to work.” 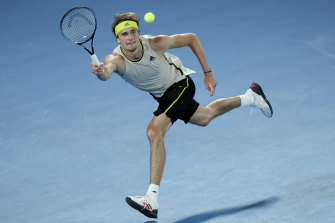 Alexander Zverev, who was knocked out of the Australian Open on Tuesday night, agreed with Djokovic’s stance.Credit:AP

“I do agree that we can’t have a travelling circuit right now. It’s just as simple as that,” Zverev said.

“Injuries will keep on happening.

“You know, there is restrictions to countries. Depends on what passport you might not even be able to go to some of the countries. I know South American players will be struggling a lot.

“We can’t have a travelling circuit right now. I think what the ATP should do and should look into is, you know, maybe having a venue like here and play multiple weeks at one place. Multiple tournaments, multiple weeks.

“Because at the end of the day in Europe right now we can’t have spectators anyways, so what difference does it really make where we play the tournament? We can change the background, we can change the, you know, city name on the court or whatever, and then play it at one venue.”

Murray crashes out of US Open in defeat by Auger-Aliassime

Andy Murray's verdict on whether Federer, Nadal or Djokovic will win GOAT race