The full extent of the injury that has plagued Nick Kyrgios’ Australian Open preparation can finally be revealed.

Sources close to Kyrgios told The Sun-Herald and The Sunday Age the 25-year-old suffered a meniscus tear in his left knee just over halfway through last year. 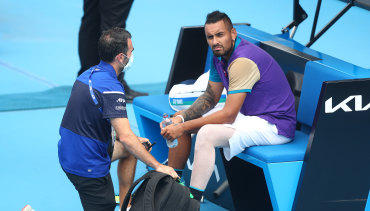 Nick Kyrgios suffered a meniscus tear halfway through his year away from the court.Credit:Getty

The small tear and the subsequent surgery were the reasons Kyrgios – who said during his loss to Borna Coric on Friday that he had required an arthroscopic procedure – has worn a sleeve on his left leg in his first matches in almost 12 months.

But while Kyrgios has had enough time up his sleeve to recover from the surgery, sources close to the Australian superstar say he is still having to manage the injury through matches.

The fact that the injury is in his “serving leg” – his left leg delivers much of power for his booming serve – has been a frustration for the Canberran.

“I’ve always had kind of knee issues, especially my left knee,” Kyrgios said after the Coric clash. “It was something that was pretty serious. I’d rather not talk about it.

“I mean, I did everything I could to get it better, to get it able to play. I’m lucky that I’m healthy enough to play.”

Before taking part in the Murray River Open, Kyrgios had not played on tour in almost 12 months.

He also took about five months away from the court altogether, only returning a month or two prior to suffering the meniscus tear.

As of Saturday afternoon, sources in the Kyrgios camp say he will line up for round one of his home grand slam on either Monday or Tuesday. The injury had not been reaggravated or developed swelling in the 24 hours since falling to Coric in straight sets.

Kyrgios’ knee problem is just one of a long list of injuries of stars who will take centre stage at Melbourne Park for the next fortnight. 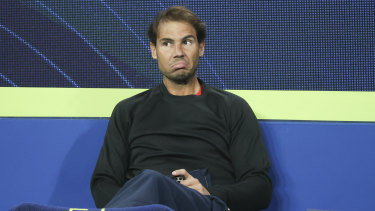 Rafael Nadal missed the entirety of Spain’s ATP Cup campaign with a back injury.Credit:AP

The winners of the Australian Open titles may well be the players who deal best with niggles the lead in to the grand slam has produced, as Rafael Nadal, Serena Williams, Naomi Osaka, Alexander Zverev and Victoria Azarenka will all enter the opening round under an injury cloud.

A back injury has kept Nadal off the court since an exhibition match win against Dominic Thiem in Adelaide, leaving Spain’s ATP Cup duties to Roberto Bautista Agut and Pablo Carreno Busta.

He practiced at Melbourne Park on Saturday evening and is expected to take his place in the first round of the tournament he won in 2009, but the niggle certainly can’t help his bid to stop Novak Djokovic claiming his eighth Australian Open.

Williams believes the shoulder complaint that saw her withdraw from a tantalising Yarra Valley Classic semi-final against Ash Barty will be an ongoing issue for the next fortnight.

“Knowing that going into a tournament definitely helps,” Williams said. “Also knowing, OK, I’m going to have to probably pick up some different therapy exercises after each match. It’s going to be really important.”

Osaka admitted the combination of a shoulder niggle and the tight turnaround between the end of the lead up tournaments and the start of the Australian Open were the decisive factors in her decision to withdraw.

“[The shoulder] kind of flared up again because I played a lot of matches back-to-back,” Osaka said. “But, yeah, for me, my main focus is hoping I can rest enough before the Open.

“I would say [the tight turnaround] is a factor because for me, I don’t normally play the tournament right before a slam. But I felt like it was really necessary to get matches in. I think everyone felt that way.

“I’m kind of sad that I wasn’t able to play today. But I think in the end it’s the right decision.”

Zverev’s three-set loss to fellow top 10 talent Daniil Medvedev was arguably the match of the ATP Cup but it also saw the German aggravate a lower back issue.

Azarenka also cited a back injury as the reason for her withdrawal from the Grampians Trophy.