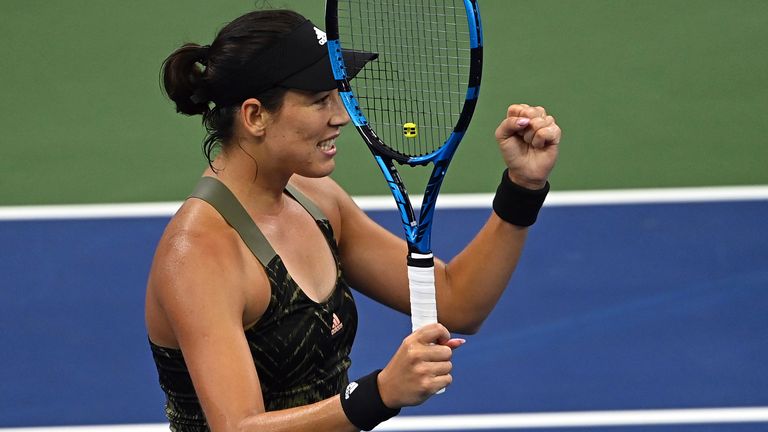 On a rain-affected third day, a quartet of former Grand Slam champions avoided the showers to book their place in the third round of the US Open at Flushing Meadows.

Garbine Muguruza has never gone beyond the fourth round in New York – the only Grand Slam where she has failed to reach the last eight, but she advanced to a blockbuster third-round showdown with Victoria Azarenka.

Muguruza needed two tie-breaks and almost two-and-a-half hours to beat Donna Vekic in the first round, but she had a more straightforward 6-4 6-2 win over Germany’s Andrea Petkovic, while Azarenka also came through in straight sets.

Like Muguruza, Azarenka is a two-time Grand Slam champion having won the Australian Open twice, but she has come agonisingly close at the US Open.

The Belarusian has lost in three finals, including against Osaka last year, and she is yet to drop a set after a 6-3 7-6 win over Jasmine Paolini.

Defending champion Naomi Osaka was the first player through on day three after Olga Danilovic, her Serbian opponent, was forced to withdraw due to illness.

Osaka, who kicked off her pursuit of a fifth Grand Slam title with a straight-sets win over Marie Bouzkova on Monday, was due to face the qualifier in the second match on Arther Ashe Stadium, but a post on social media from Danilovic confirmed the qualifier’s first US Open was cut short.

“I am so sad to have to [withdraw] from my match this morning,” Danilovic wrote on social media.

“I have been feeling unwell these past few days dealing with a non-Covid related viral illness. I was really looking forward to playing against Naomi on Arthur Ashe Stadium today, but not to be this time.”

Osaka will face Leylah Fernandez after the Canadian teenager was an impressive 7-5 7-5 winner over experienced Estonia Kaia Kanepi. Simona Halep has shrugged off her injury troubles to make impressive progress to the third round. The former world No 1 was hugely impressive in seeing off Camila Giorgi in a tough opener, and she followed up with a more routine 6-3 6-1 win over world No 111 Kristina Kucova.

🇷🇴 @Simona_Halep has lifted 11 hard-court titles in her career.

Will No. 1️⃣2️⃣ come this year in New York? pic.twitter.com/UyU745AxlF

Elsewhere Tunisia’s Ons Jabeur, seeded 20th in her pursuit of a maiden Grand Slam title, wasted little time in booking her place in the last 32.

She needed just 53 minutes to beat 19-year-old Colombian Maria Osorio Serrano – losing just one game along the way and she will now face Belgian 15th seed Elise Mertens, who beat the lowest-ranked remaining player in the field, Greece’s world No 234 Valentini Grammatikopoulou.

After five quarter-finals and two semi-finals Elina Svitolina, the world No 5, remains in pursuit of her first Grand Slam title and she was in a hurry to avoid any rain delays. In just 63 minutes she powered her way past Rebeka Masarova for a 6-2 7-5 win.