Home » Tennis » ‘What you focus on, you become’: Djokovic, Medvedev advance at Adelaide International

Novak Djokovic is adamant he holds no grudge against Australia about being booted out of the country over his COVID-19 vaccination status but concedes this visit is different to all others.

The nine-time Australian Open champion largely cruised on Tuesday during a 6-3, 6-2 demolition of Constant Lestienne at the Adelaide International, which set up a second-round clash with another Frenchman, Quentin Halys, who beat Australia’s Jordan Thompson.

He had some early season rust to shake, as was evident in a doubles loss on Monday, on top of Lestienne – a 30-year-old late bloomer who broke into the top 100 last year – showing some surprising pluck. 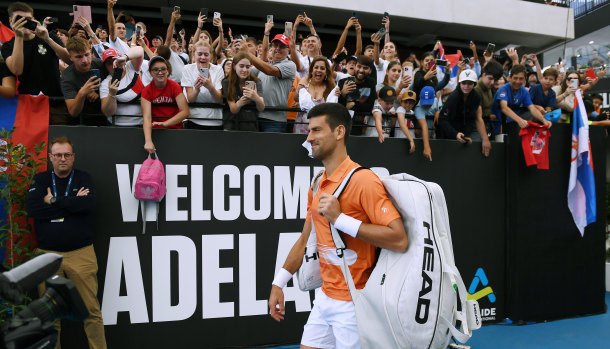 Lestienne even earned the first break point of the match in the fifth game, but Djokovic dodged that curveball and soon grabbed control as he began to resemble his usual indestructible self.

It wasn’t quite the same party atmosphere from his doubles match – his first competitive hit-out in Australia since government authorities deported him last year – but the crowd was again strongly in his favour.

Djokovic fans found their voice early in the second set as his dominance set in, with chants of “Nole” echoing across The Drive’s centre court stadium.

“To see the packed house for my first match was definitely a very pleasant surprise [with] lots of support, lots of love,” he said.

“That motivated me and allowed me to express myself in the best possible way on the court with my game.

“I thought I played very solid … I managed to play solid in important moments and got rewarded with a break and, after that, I didn’t look back. I played really well in the second set.”

Djokovic’s overwhelmingly positive on-court reception falls in line, he says, with every experience he has had since arriving last week, somewhat unsure what greeting he would receive.

“I can say it was different coming into Australia this year than any other year, certainly, because of the events 12 months ago, but at the same time, 12 months is quite a long time as well,” he said.

“Already it’s behind me; I’ve moved on. I’m looking forward to coming because I always play very well and probably my best tennis throughout my career on Australian soil, so I came in early … I don’t actually recall when I came that early to Australia.

“I had plenty of time to adjust to the time zone, time difference, and just, I guess, adapt to whatever was waiting for me here. As I said from day one, people have been very kind and generous, with me and my team.”

Djokovic did seem determined not to shed much light on his psyche before boarding the plane to the country but revealed he joked with his team, “hoping that I can enter Australia this time”.

“If I was not looking forward to coming to Australia, I wouldn’t be here,” he said.

“I want to be here, and I’m glad that I received so far the reception that I wish for. The overall experience up to this moment is very positive and there is no reason to focus on [anything else].

“What you focus on, you become, so if I focus on the negatives that’s what I will attract. I don’t want to do that. I don’t hold a grudge, I’m here to play tennis, to enjoy sports and spread good energy.”

Sonego took it up to Medvedev right until he withdrew from the contest – and probably should have been one set up, given he had nine set points on the Russian’s serve, including three in a row in the 12th game. 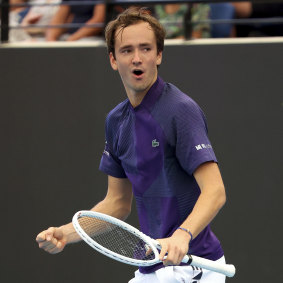 Daniil Medvedev was understandably pleased to survive in Adelaide on Tuesday.Credit:AP

But the 2021 US Open champion and dual Australian Open runner-up repeatedly came up big on serve in those moments, then made his move at six-all in the tiebreak with consecutive trademark points to draw Sonego errors.

Sonego broke Medvedev’s serve only once to start the second set but handed that advantage straight back before taking a medical timeout after the third game.

“What a match to start the year. Definitely unfortunate for everybody, I think, that it finished early, in a way, even if we played one hour, 40 [minutes], but happy to be able to win the first set. Of course, I wish Lorenzo a speedy recovery, and, hopefully, we’re going to see him even stronger.”