Home » Tennis » ‘When I’m ready to play, I’ll play’: Kyrgios’ next move a mystery he’s yet to solve

Not even Nick Kyrgios knows what his next move will be.

The Australian superstar bowed out of the Australian Open in another five-set epic at John Cain Arena on Friday night – this time at the hands of third seed Dominic Thiem. 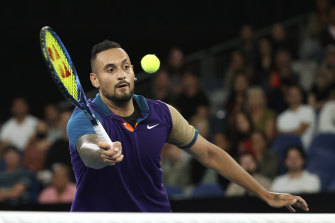 Nick Kyrgios said he was proud of himself after his performance at this year’s Australian Open.Credit:AP

After spending a year away from the tour, he was a few points away from beating the player many believe will eventually succeed Novak Djokovic, Rafael Nadal and Roger Federer as the world’s best.

“ I mean, he’s the third-best player in the world for a reason,” Kyrgios said.

“And I’m right there and I believe in myself. I knew that today I had an absolute fighting chance.

“I walked in that match expecting to win. That’s how I always go into a match. But he steadied the ship well and that’s why he’s great.”

Kyrgios’ year away from the court showed he will not rush to his next tournament.

But not even the 25-year-old is sure when he will play next.

“For me personally, man, I’m used to playing in front of packed stadiums. I’m not gonna force myself around the world when the time is not right where I have to quarantine for a week and then play. I don’t know.

“I’m not too sure what lies head.” 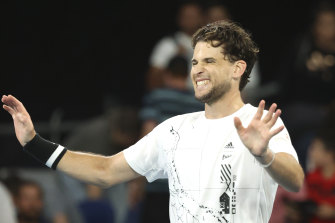 Kyrgios’ best surface has always been grass but, when asked whether he would target Wimbledon as his next big tournament, the Canberran said he had given no thought to that possibility.

“I don’t even know what tournaments there are after this. I have paid no attention to what I’m playing afterwards, really,” he said.

“I’ll look at it when it comes around. I’m not going to even think about anything at the moment, especially just coming off the court. The last thing I’m gonna do is think about where I’m gonna play next.

“I’m going to enjoy the next week just living. Just enjoying time. We’re in lockdown after tonight, so I’m not thinking about it.

ATP Finals 2020: Who are Nadal and Djokovic playing in the semi-finals? FULL schedule