One of tennis’ most fascinating rivalries is set for a dramatic new chapter on Friday night when Nick Kyrgios and Rafael Nadal meet for a spot in the Wimbledon final. The opening chapter was written eight years at the same venue. 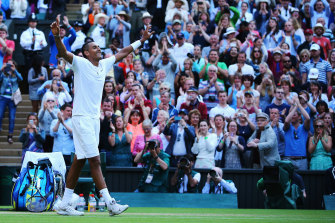 This was long before the controversies and allegations, the tanking accusations, the social media biffs, the mental health battles, the boorish on-court behaviour and verbal attacks on the umpires, line judges, fans, journalists, his support staff, himself – back when the only interest people had in the then-19-year-old was purely athletic.

A wildcard entry at the All England Club, and ranked just 144 in the world, Kyrgios mowed through Frenchmen Stephane Robert and Richard Gasquet, then Czech Jiri Vesely, to set up his showdown with Nadal, a legend in his prime years.

Most people thought this was where Kyrgios’ brave run would end. Even his mother tipped before the match that Nadal would be too good.

Despite the enormity of the task at hand, Kyrgios showed not a single hint of nerves on his centre court debut. As we’d soon learn, he does his best work in front of big crowds.

He took the first set on a tiebreaker, then lost the second, during which he produced the shot of the match, if not the year – an audacious, instinctive, opinion-splitting ‘tweener’, a stroke that would become one of his trademarks, and a tantalising taste of what was to come.

Seventy winners and 37 aces later, Kyrgios was a global megastar, the first player from outside the top 100 to knock out a world number one at a grand slam for more than two decades. Australian tennis had a new hero. Sponsors queued up for a piece of the action. He’s rarely been out of the news since.

The Herald’s Peter FitzSimons wrote: “He appears to be a good bloke … [our] first player since Pat Rafter that we won’t have to learn to love, but can love from the first.”

We all know what happened next: a lot. 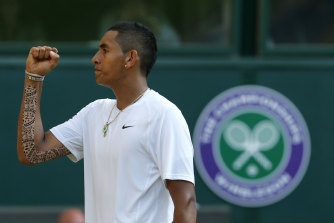 Nick Kyrgios was 19 when he met – and defeated – Rafael Nadal for the first time at Wimbledon in 2014.Credit:AP

While he was knocked out in the quarter-finals by Milos Raonic at Wimbledon that year, most pundits were ready to anoint Kyrgios as the next big thing, a youngster good enough to challenge the supremacy of Nadal, Novak Djokovic and Roger Federer.

Of course, it didn’t quite work out that way. Kyrgios would only reach the final eight of a grand slam once more, at the Australian Open in 2015, prior to this current breakthrough. 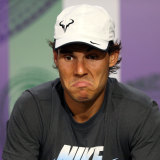 Unlike most of the tennis world at the time, Rafael Nadal was not immediately buying into the Nick Kyrgios hype after the four-set defeat.Credit:Getty

Nadal was far more circumspect at the time, and over the ensuing years, regarding Kyrgios’ top-10 potential and whether he would actually fulfil it. “He’s a player who has enormous talent, could be winning grand slams or fighting for the No. 1 ranking,” he said after losing to Kyrgios again, five years later at the 2019 Mexican Open. “He lacks respect for the crowd, his opponent and towards himself.”

Those comments, and Kyrgios’ angry reaction to them, helped fuel the animosity between the two, which boiled over a few months later at Wimbledon when they met in the second round. Nadal won in four sets and Kyrgios went off the boil, attempting to hit his opponent with a stinging forehand. The Spaniard holds a 6-3 edge in their head-to-head record.

History has proved him correct for not fully buying into the initial hype. Kyrgios never quite cracked the top 10, and after beating Chile’s Cristian Garin on Thursday morning (AEST) to reach his first grand slam semi-final – a career-best achievement – he admitted he felt he’d already “wasted” his chance to get to such a stage.

Instead, he has become something else entirely: an avatar for a new generation of fans who admire him for living life his way and playing tennis on his terms. At 27, he now stands closer than ever to belatedly reaching the level many experts say he should have been at long ago.

And even Nadal has acknowledged that, while he might not be everyone’s cup of tea, Kyrgios has broadly been a force for good.

“Sometimes he does things I don’t like,” Nadal said earlier this year after a hard-fought win over a gallant Kyrgios at Indian Wells.

“But I respect everyone’s character, differences of opinion and upbringing. He fought until the end and he produced great tennis. It’s the Nick Kyrgios that I want to see and, no doubt, that people want to see too. Because it’s good for tennis.”