Home » Tennis » Williams warms up ahead of Australian Open

Serena Williams arrived for her first match at Melbourne Park this year wearing what looked like two warm-up garments, a jacket and a windcheater. She only ever removed one in laying down a marker for the three weeks to come with a straight sets win over local go-getter Daria Gavrilova.

Straight should not be mistaken for perfunctory. Both players looked sharp considering how little tennis Williams has played in the last 12 months, and how even more meagre Gavrilova’s recent playing history. But this match would always have only one outcome. 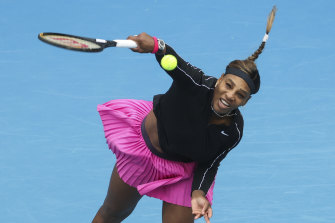 Dasha was and is no plodder, but this was a class above. As a contest, it was competitively one-sided.

As for the occasion, this was tennis with lingering COVID side-effects. It was, in a word, empty. There was a negligible crowd, whose contribution was to clap, as if at a recital. It would not have surprised to hear the chair umpire call: “Noise, please.” You suspect Williams’s hotel room, co-occupied by her three-year-old daughter, Olympia, is a more raucous place.

There were no lines-people, and so no arguments, and probably not much appetite for them this day anyway. There was a disembodied voice to call “out”, a weird effect. This is how it will be at the Open proper, incidentally.

There were ball-kids, but it was DYI towels, red box for Williams, blue for Gavrilova, and don’t mix them up. Throughout, Wiliams wore what looked for all the world like a zip-up windcheater, and Gavrilova was in singlet and shorts. It was as if they were playing for the Gippsland trophy, which they were. 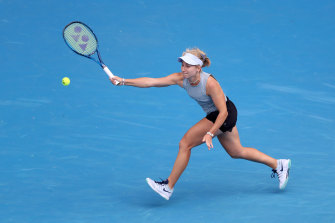 Essentially, this was one of 388 matches being played over eight days at Melbourne Park, match practice for those sorely lacking it, which is all of them. This day there were more than 50 matches, on Wednesday it will be 89. To give them sort of order and meaning, they’ve been divided into six makeshift tournaments at one time in one place. Williams may well win the Gippsland trophy without ever setting foot in the place.

Then, the Australian Open, and the question of the elusive 24th major championship, and … but we’ll leave that for next week. At Melbourne Park, the long haul has begun. As Williams said, looking at the vacant tiers of Margaret Court arena: “It feels different to be here and playing, but not in the Australian Open yet.”