Home » Tennis » Wimbledon 2021: Novak Djokovic fights back from a set down to beat Jack Draper on Centre Court 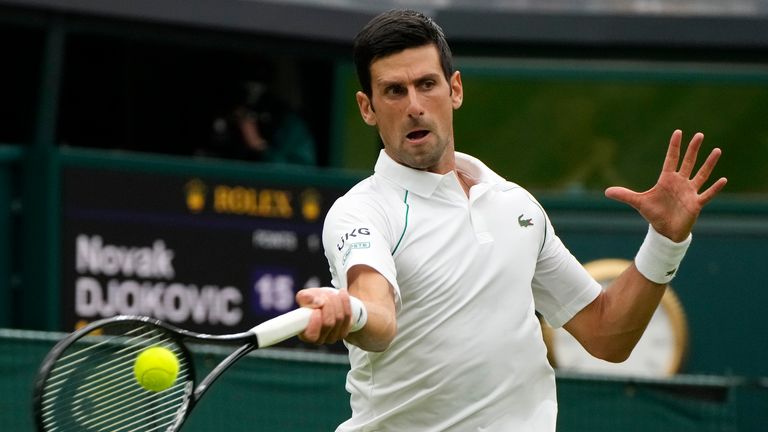 British teenager Jack Draper gave Novak Djokovic an early fright on Day One at a rain-soaked Wimbledon before the world No 1 fought back from a set down to kick off his bid for a 20th Grand Slam singles title with a 4-6 6-1 6-2 6-2 victory.

Nineteen-year-old Draper – ranked 253rd in the world and a wildcard into the Championships this year – was making his Grand Slam debut and delighted the Centre Court crowd when he claimed the first set.

However five-time champion Djokovic – who has already won the first two majors of the year – weathered the storm under the roof and the rain clouds overhead to get off to a winning start in his bid to join Roger Federer and Rafael Nadal at the top of the all-time list.

The 34-year-old lost just five more games as he raced through the next three sets in 83 minutes to raise the curtain in south west London after rain delayed the start of play on the outside courts – 715 days on from his five-set epic triumph over Federer in the 2019 final. 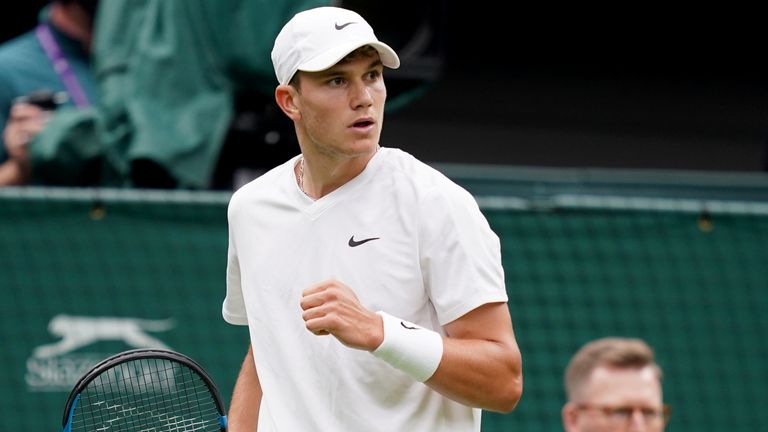 “It feels great seeing everyone and being back on the most special and sacred tennis court in the world,” Djokovic said on court afterwards.

“Alongside many other players, I was very sad last year that Wimbledon was cancelled. It was a difficult time for everyone but I’m really glad that the sport is back, hopefully you guys have enjoyed it and you will do for the next couple of weeks.”

Djokovic was in imperious form after the opener, serving impressively and making regular in-roads on Draper’s serve, but the Serb had words of praise for Britain’s latest hope.

“He definitely deserves a round of applause… I mean he’s only a youngster at 19. I hadn’t seen him play too much prior to Queen’s, where he played pretty well and won a couple of matches against high-ranked players,” Djokovic said.

“Walking onto Wimbledon Centre Court for him, for the first time, I think that he has done extremely well. He carried himself very maturely on the court, he behaved well and backed himself. He believed that he could come back, and he deserves credit for that. I wish him all of the best for the rest of his career.”

With the roof closed after a morning of persistent rain, play got under way after key workers from around the country – special guests in the Royal Box – were given a rousing ovation ahead of Draper and Djokovic’s arrival.

While Djokovic has history beckoning, it was Draper’s first-ever Grand Slam match, and buoyed by an impressive showing at Queen’s, where he reached the quarter-finals after toppling top 40 players Jannick Sinner and Alexander Bublik, he settled quickly.

After a routine hold from Djokovic, Draper fended off an early break point to put his first Grand Slam game on the board, and then fashioned a couple of break points of his own on his opponent’s serve – which he took at the second time of asking.

Djokovic continued to fashion chances on Draper’s serve, but despite double faults creeping in, the teenager from Sutton raised his game when he needed to seal the first set – seeing off seven break points and winning 85 per cent of points behind his first serve.

With a raucous Centre Court against him, Djokovic finally got his breakthrough on the left-hander’s serve as he opened up a 3-0 lead at the start of the second set before Draper – who is not 20 until December – got on the board.

However, a second break of the young Brit’s serve followed and when he fired down a second serve ace Djokovic had levelled the match in 26 minutes. 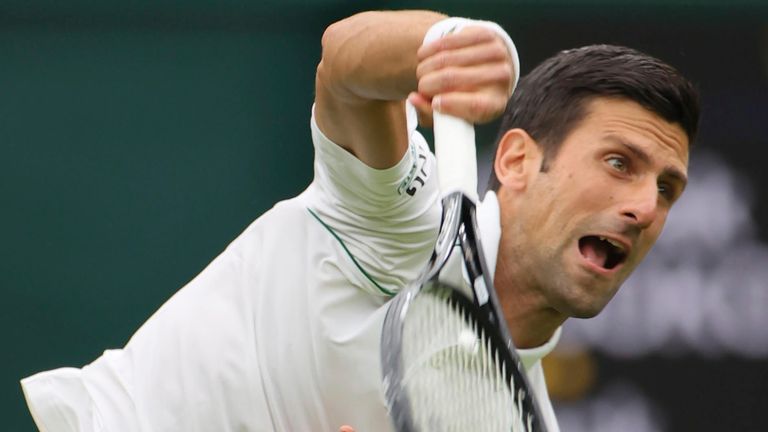 Having managed just a solitary game in the second set, Draper went one better in the third but he had no answer to Djokovic’s relentless serve – a weapon that’s been much improved in recent years.

That was underlined when having seized a second break, he held serve in just 46 seconds on the back of four successive aces to seal the lead and then race through the final set.

Despite a fine display, there were a few moments for Djokovic to worry about – mainly the greasy conditions as the grass was played on for the first time in two years, under a roof after a miserable start to the fortnight.

“I don’t recall falling so many times [before], it was quite slippery. Whether it’s because the roof is closed or because it’s been raining quite a lot over the last few days, I don’t know?” Djokovic said.

“Obviously, it’s a huge honour to walk onto this court, it’s the most special court, the court that I always dreamed of when I was a kid. I dreamed of playing on Centre Court one day and winning Wimbledon. I try not to take anything for granted; every time I step onto this court you feel the history and the tradition. I’ll just take it one day at a time.”

Djokovic will next face Kevin Anderson (the man he beat in the 2018 final) or Marcelo Barrios Vera (world no 209) as he not only targets his great rivals’ record but also his bid to become the first man since Rod Laver in 1969 to win the calendar-year grand slam.

Nick Kyrgios brands US Open organisers as ‘selfish’ for going ahead