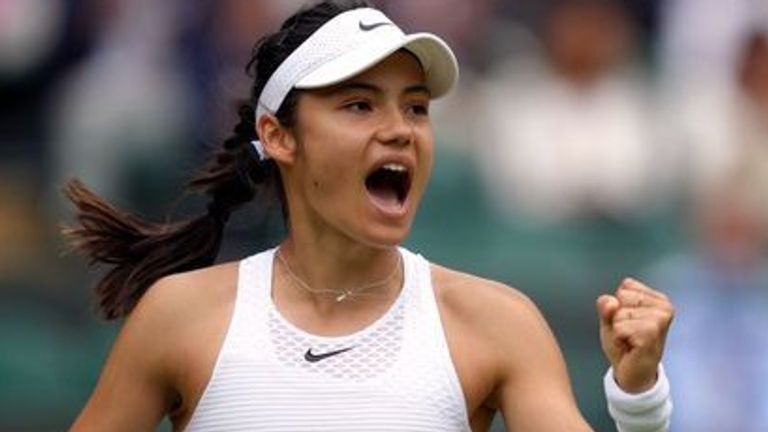 Emma Raducanu’s spectacular Wimbledon debut continued as the teenager stunned Sorana Cirstea to become the youngest British woman to reach the last 16 in the Open Era.

Raducanu, who has been known as a serious talent within the British game for many years, had already swept past qualifier Vitalia Diatchenko and former French Open finalist Marketa Vondrousova to reach the third round without dropping a set.

The 18-year-old stayed in school to complete A levels in maths and economics, only finishing a couple of months ago, and playing on the biggest stage of her career so far on Court One, she handled the occasion in impeccable fashion.

Taking on the world No 45, who knocked out Victoria Azarenka in the previous round, Raducanu produced a sparkling attacking display, fighting spirit and tenacity, claiming the win on her third match point.

Raducanu said in her on-court interview: “Honestly, I am so speechless right now, at the end I didn’t know what my reaction would be if I won and that just happened, I am so so grateful for all the support I had today.

“Who would have thought, it is funny because at the start when I was packing to come into the bubble, my parents were like, ‘Aren’t you packing too many sets of match kit?’.

“I think I am going to have to do some laundry tonight, but I think they have a laundry service at the hotel, so I am all good.”

Raducanu next faces a very winnable fourth-round clash against Ajla Tomljanovic on Monday, which will surely be played on Centre Court. The Australian world No 75 upset former French Open champion Jelena Ostapenko 4-6 6-4 6-2.

American teenager Coco Gauff matched her feat of reaching the second week on her debut two years ago.

The 17-year-old, who beat Venus Williams on her way to the fourth round in 2019, swept past Slovenian Kaja Juvan 6-3 6-3 on Centre Court.

Former Wimbledon champion Angelique Kerber was put through the wringer early in her match with unseeded Aliaksandra Sasnovich but the German rallied from a set down to win 2-6 6-0 6-1 following a rain delay.