The All England Club will be put under increasing pressure to alter their long-running dress code, with female activists plotting to protest Saturday’s women’s final by wearing red under-shorts to highlight the difficulties players face relating to their period. In the meantime, Novak Djokovic and Cameron Norrie are due on court later today to decide who will face Nick Kyrgios in the men’s final.

Wimbledon was rocked yesterday when Rafael Nadal announced that he would be pulling out of his semi-final with Kyrgios due to an abdominal tear. The Spaniard had turned out for a secretive practice session, but he and his coach arrived at the conclusion that winning two matches would be impossible in his current state.

The Aussie subsequently benefitted from a walkover into his first major final, where he will face either Djokovic or Norrie. The line-up on the women’s side of the draw was confirmed on Thursday, with Ons Jabeur gearing up to face Elena Rybakina on Saturday.

With protests sprinkled in among the sequence of mouth-watering clashes on the horizon, Express Sport will keep you up to date throughout the day. 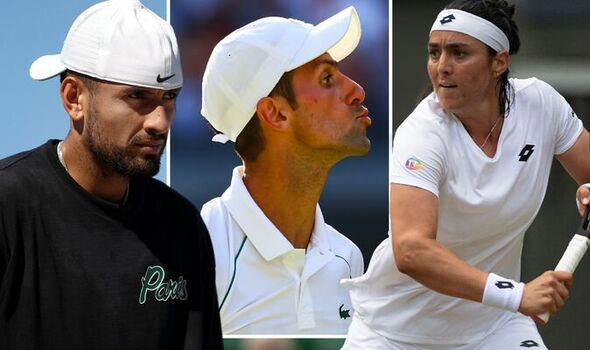 A small-scale protest will supposedly take place during the women’s Wimbledon final this Saturday, according to The Telegraph.

The All England Club’s strict all-white dress code, which stipulates that competitors must wear almost entirely white attire, has been accused of causing ‘anxiety’ for female tennis stars who menstruate.

Red under-shorts will be worn by the protestors in tribute to Tatiana Golovin, who sparked a frenzy by doing the same thing during her match in 2007. The campaign is called ‘Adress The Dress Code’.