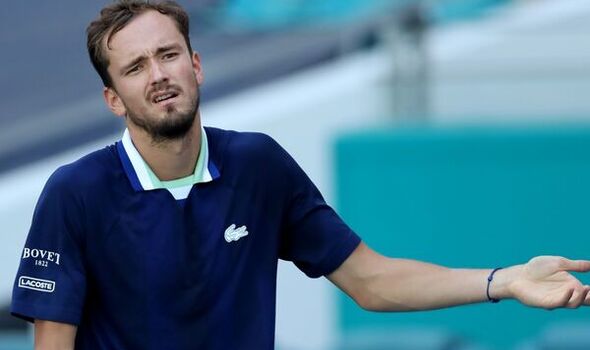 Wimbledon’s ban on Russian tennis players may put it out of step with the other Grand Slams and expose it to accusations of discrimination but in the trying circumstances the championships were presented with it was the right call. As much for Daniil Medvedev and co as anyone.

The criticism of Wimbledon has overlooked the fact that as a championship it was faced with a Russian doll of a problem. On the outside there was the moral quandary faced by the French Open and the rest of denying individual sportsmen and women the chance to compete simply because of an accident of birth. Exclusion by geography jars but inside there were unique layers of complexity to this situation.

The Ukrainian players did not want the Russians there – that in itself, coming from a country at risk of being erased from the map, held a powerful sway. And other sports like athletics and rowing had provided a precedent in issuing bans on Russian competitors – not just teams.

But the most pertinent point in Wimbledon’s decision-making process – thanks to the intervention of the UK government – was the players’ own safety. Not from hordes of unruly strawberry-throwing louts at SW19 but the very real menace of the Russian state itself.

The stipulation by the UK authorities that any player intending to compete at Wimbledon as a neutral athlete was required to come out against the Putin regime first was a dangerous hoop for them to jump through.

Put yourself in Medvedev’s position. Either he backs his country’s ‘special military operation’ and is forever labelled a war-monger or he effectively calls out Putin.

Whatever his private thoughts on the horrors unleashed in Ukraine would the World No 2 have really wanted to do that and possibly compromise the well-being of his loved ones back in Russia?

And what about his own security? He may live in Monte Carlo but as the Salisbury poisoning showed, Putin’s murderous silencing operation has a long reach.

He can have his moments on the court and be a pantomime bad guy sometimes but he is no oligarch tied to the Russian state. He is simply a tennis player who happens to have been born in a country which has fallen into malevolent hands.

For those Russian players who still live in their home country like Daria Kasatkina and Veronika Kudermetova – both in the top 30 of the women’s rankings – the dangers of rebel-speak are even more acute.

Signing a declaration of opposition for a Russian athlete comes with consequences. By banning them, Wimbledon has taken the quivering quill out of their hands.

The one reliable indicator that SW19 has got this difficult call right was a statement by Novak Djokovic denouncing it. If Wimbledon is in the opposite corner to Djokovic on any given subject its instincts are probably sound.

The defending champion is an expert at missing the point and he has done so again on this one in glossing over the predicament the British government’s demands created. On a purely sporting level it is sad. Medvedev, for one, is the US Open champion and it would have been good to have him along for the ride.

Equally World No 8 Andrey Rublev, who reached the fourth round of Wimbledon last year, will miss out. He was brave enough to scribble a ‘no war please’ message on a TV camera lens at the Dubai Championships in February.

But while the Russian state response was to claim Wimbledon was weakening its own tournament by banning players from its country and the puppet state of Belarus, the championships are hardly on their uppers after losing them.

Sanctions hurt – that is the point of them – but Wimbledon will still be Wimbledon without the Russians this summer. God-willing, Medvedev and the rest will be back when this madness is over.