Home » Tennis » ‘You can’t hide who you are’: ‘Scud’ says he would have been on board with Netflix

Mark Philippoussis says he would have embraced being uncomfortable as in-your-face documentary makers recorded revealing moments of his tennis career, despite his desire for a private life.

The former Australian star says the sport’s move into fly-on-the-wall storytelling with Netflix series Break Point, launched to coincide with the Australian Open, was an “incredible” opportunity for fans. 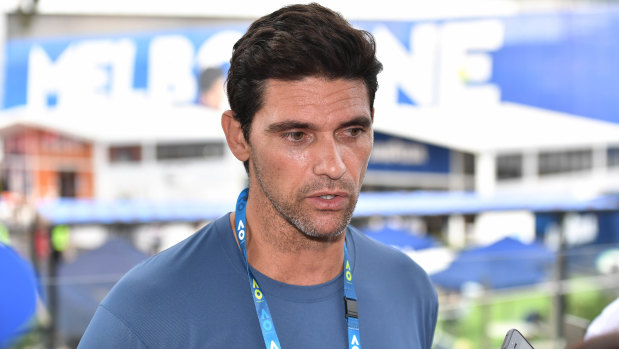 And, during his high-profile playing career, he would have happily signed up.

A big-serving former world No.8 whose love life while playing attracted the constant attention of the tabloids and who, in retirement, appeared as a bachelor in a reality TV show, Philippoussis had little hesitation in saying he would have allowed the cameras in.

The many moods of the highly talented Nick Kyrgios are a part of the early episodes of Break Point, with the Canberran’s path to last year’s Australian Open men’s doubles final with close friend Thanasi Kokkinakis the dominant theme of episode one.

Philippoussis is unsure whether Kyrgios will be better placed this January after Wimbledon breakthrough, where the Australian lost year’s final to Novak Djokovic.

“I don’t know, there’s a lot of tennis to be played. Every tournament is different. We’ll have to see,” he said.

“There’s a lot that is done over two weeks physically and mentally.”

For Philippoussis, his successful career highlighted by two major finals and crucial roles in Davis Cup wins but, also, falling short at his home grand slam – where expectations on Australian players skyrocket – would have made for exceptional Netflix fodder.

When asked to reflect on his enviable record on the road – the 1998 US Open final loss to Pat Rafter and the 2003 Wimbledon defeat to Roger Federer, for starters – Philippoussis speaks with pride about wearing the green and gold.

“We only had very few tournaments in Australia, but …. I would say [on] Australian Open level I definitely wasn’t as successful as I could have been, that’s for sure,” said the 46-year-old.

“But I played some amazing matches – I won Davis Cup on home soil [against Spain at Melbourne Park in 2003], Hopman Cup [wins].

“I have played some of my best tennis here but unfortunately, I couldn’t connect for those two weeks during the Australian Open.”

While playing Philippoussis was allocated nicknames with different levels of punch – Scud (as in scud missile) but also the ‘Poo’. He’s been able to take the mickey out of himself in an Uber Eats advertisement that airs during the Australian Open.

“Man, I’ve been called worse for free,” said of the ‘Poo’ label.

“So it doesn’t matter much about that.”

Motor sport’s success with Drive To Survive series shows tennis is on the right path with its Netflix foray, Philippoussis says.

“I’m a fan of Formula 1. I became a bigger fan because [you could watch] the workings of the teams. You feel like you got to know the drivers on a little bit more of a personal level,” he said.

“I became a bigger fan of the sport (F1) because you got to understand how it worked a little bit more.

“I thought that was fantastic -so the fact that I heard they’re doing a tennis one, I feel it’s great.” 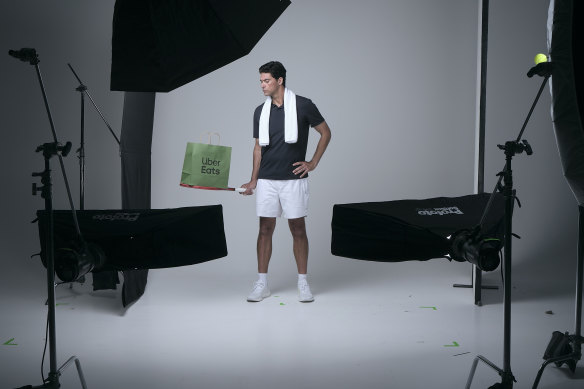 Mark Philippoussis on the UberEats set.

Philippoussis’ raw and immediate reactions to the highs and lows of tennis would have made for compelling viewing. Not to mention times such as when he snuck a kiss with Anna Kournikova, a moment captured by tennis paparazzi.

“Would I have agreed for them to film [on Netflix]?, Of course I would have,” he said.

“I’m a pretty private person so I’m sure there’s things that you could agree to do, or not agree to do.

“You can’t hide who you are. It really shows who you are as a person.”

Philippoussis is tipping Novak Djokovic to make it title number 10 in Melbourne, especially after the Serbian was deported last January.

“I wouldn’t say [he’s the] clear favourite, but I do see him as the favourite [after] the way he finished the year at the ATP Finals,” he said.

“He started off the year well in Adelaide and he wants to make up for lost time. He’s the one to beat.”