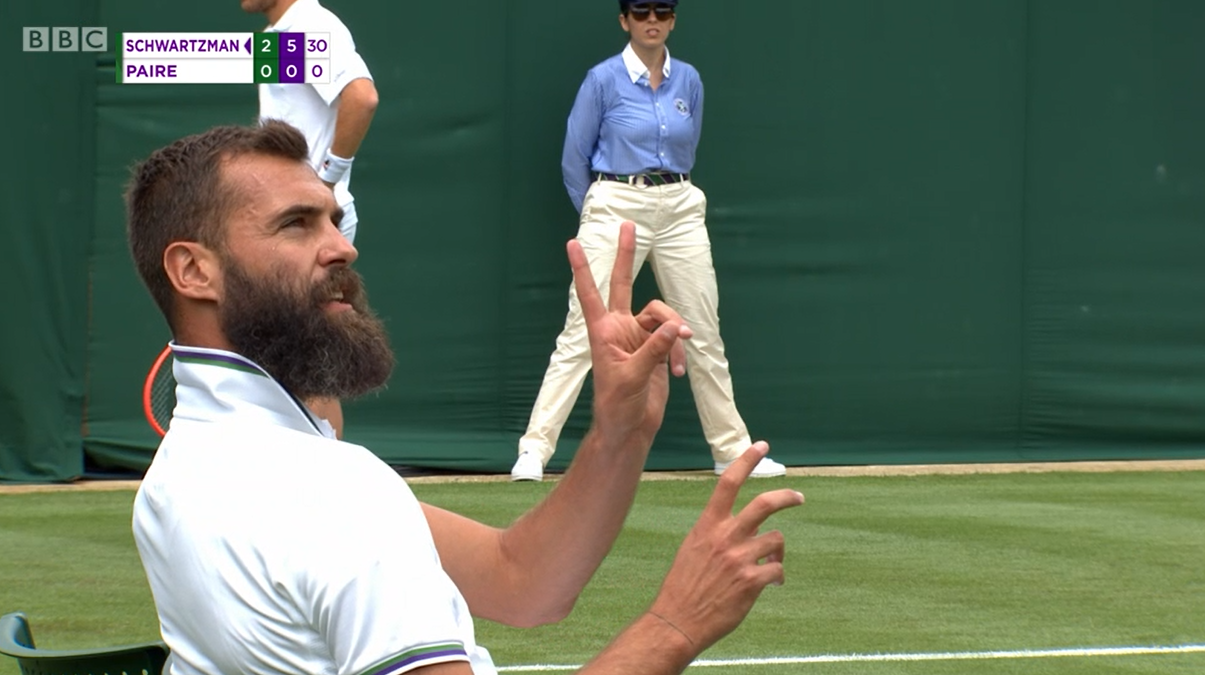 Benoit Paire was handed a lack of effort code violation on Tuesday, as he failed to win a game in the final set of his 6-3 6-4 6-0 Wimbledon defeat to Diego Schwartzman.

Paire, the world No. 46 from France, is a controversial figure on the ATP Tour.

This year, he has won just two matches of a possible 19, he branded the Australian Open as ‘sh*t’, courted controversy for spitting on court and was banned from the French Olympic team due to ‘deeply inappropriate behaviour’.

On Tuesday, he returned to court two sets down from the previous day’s play and didn’t look particularly keen on turning things around.

After slapping two forehand returns into the net in the first two points of the final game of the match, umpire Mohamed Lahyani handed him a code violation for a lack of effort.

Suddenly springing to life, Paire rushed to his chair: ‘Call the physio. I have pain.

Lahyani, unwilling to budge, replied: ‘You cannot play like this. I’m not going to call the physio for this. You have to show more sportsmanship.’

Paire continued: ‘How many forehands did I put in the net in the first two sets? How many?’

Lahyani concluded: ‘You have to try to do your best.’

One member of the crowd was desperately unimpressed, shouting: ‘You’re wasting everybody’s time.’

Paire – who only won five points in the final set – then returned to court, lost the final two points of the match and was promptly dumped out of the tournament.

In his post-match press conference, he said he ‘did not care’ that the supporter was unhappy with him and expressed his frustration at the restrictions in the Wimbledon bubble.

He also challenged Lahyani’s assessment that he was not putting in effort, however, it’s likely he will receive a fine.

‘I do not care about the people,’ said Paire. ‘I play for me and that is it. I do not play for people.

‘This thing I don’t like is how they treat us, like stay in bubble and everybody is out in the city.’

He added: ‘Mentally it is not easy for me since we start again. I said to the press every time with the bubble it is not for me.

‘I try my best when I am in the bubble, but for me playing tennis like this is impossible. So I try my best. It is tough for me.

‘I pull out last week from Eastbourne because mentally I was not good enough. This week I tried my best and when you try your best you will take a warning because you do not do your best effort.’

In French, he added: ‘It was 5-0 30-0 with five minutes to go. I think it is a bit ridiculous. I find it difficult to accept this decision. I did what I could. It (the warning) served no purpose.’